With only seven Ironman races remaining before the first cutoff at the end of July, it’s a good time to have a close look at the current qualifying situation. This post looks at the situation for the men, yesterday’s post analyzes the women’s standings.

Let’s start with an overview of the ranking in mid-June (click on the graph for a higher-res version): 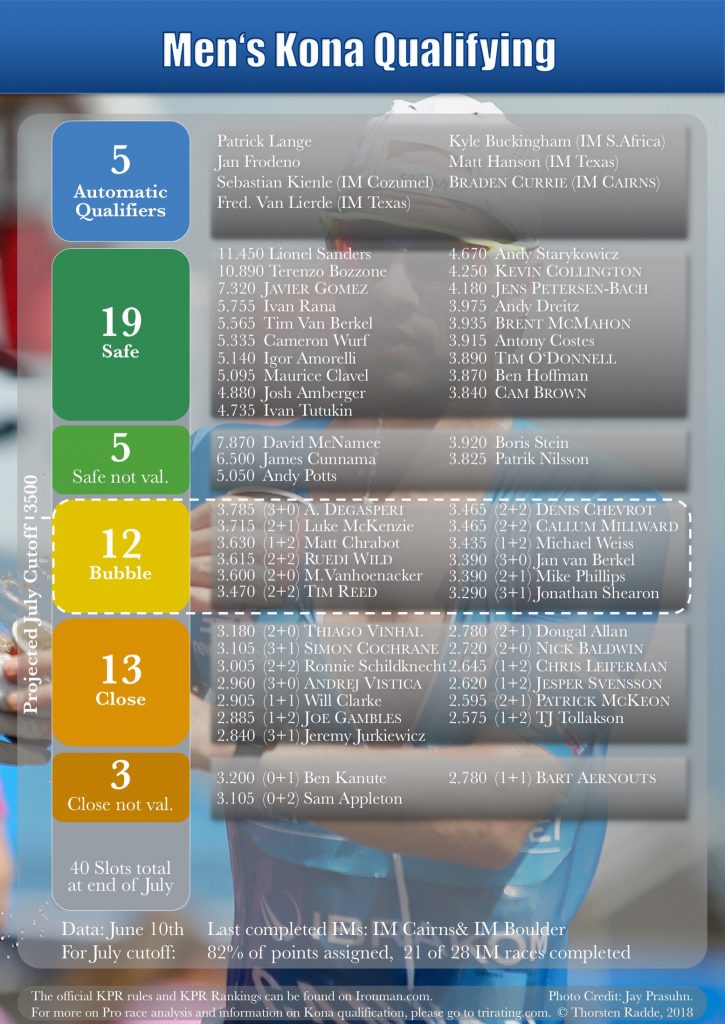 Based on the projected cutoff around 3.500 points the graph shows six categories:

There is a total of 40 “points slots” for the men at the end of July. If you add up the number of athletes in the different categories (leaving aside the AQs) you already end up with more than 50, so you can see that the race is very tight.

Ironman has released entry lists and start lists for all the remaining Ironman races up to the end of July. As always, they are easily accessible through my Race Posts showing the entries with their current KPR points and the seedings for races with a closed start list.

The following table shows an overview of the remaining Ironman races and the currently registered athletes currently without a secure Kona slot. (Of course, most races have some more high-profile athletes on the start list, and athletes can still register for most of these races.) I’ve also listed a few “Additional Athletes” who aren’t shown in the graph above but who still have a chance for a slot:

A few of the athletes haven’t announced their plans yet (James Cunnama, Bart Aernouts) or have been forced to change them (Boris Stein who planned to race IM France but had a bike crash a few days out and won’t be able to race).

As you can see, the number of athletes that aren’t on my graph but still have a chance to qualify is quite large. There are also a few more 70.3s on the calendar that may not have many points but can still make a difference when things are getting close, so it’s hard to tell at this point who will actually qualify. Some athletes might also decide to look for a race in August to secure one of the additional ten male slots that are even harder to predict.