With only seven Ironman races remaining before the first cutoff at the end of July, it’s a good time to have a close look at the current qualifying situation. This first post looks at the situation for the women, another post analyzes the men’s standings.

First let’s have an overview (click on the graph for a higher-res version): 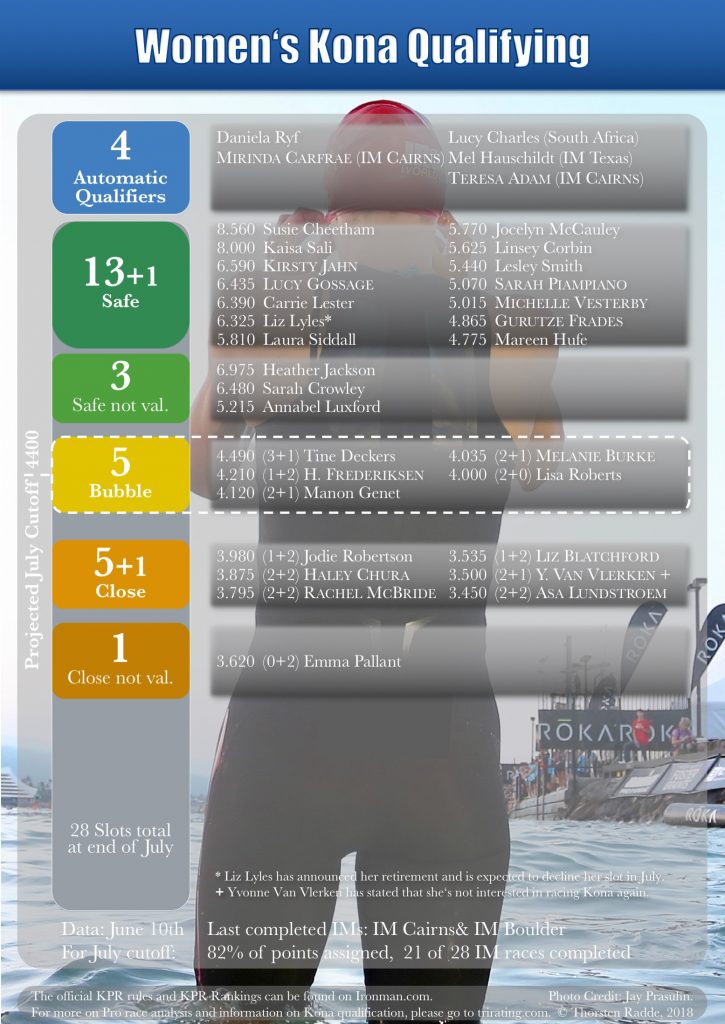 Based on the projected cutoff around 4.400 points the graph shows six categories:

There is a total of 28 “points slots” for the women at the end of July. If you add up the number of athletes in the different categories (leaving aside the AQs) you end up with 29 (maybe minus two for Liz and Yvonne), so you can see that the race is very tight.

Ironman has released entry lists and start lists for all the remaining Ironman races up to the end of July. As always, they are easily accessible through my Race Posts showing the entries with their current KPR points and the seedings for races with a closed start list.

The following table shows an overview of the remaining Ironman races and the registered athletes currently without a secure Kona slot. (Of course, most races have some more high-profile athletes on the start list.) I’ve also listed a few “Additional Athletes” who aren’t shown in the graph above but who still have a chance for a slot (e.g. Eva Wutti who will likely attempt the “double” in Austria and Frankfurt or the Ironman rookies Sarah True, Laura Philipp and Anne Haug expected to race in Frankfurt):

As you can see, the number of athletes that aren’t on my graph but still have a chance to qualify is quite large. There are also a few more 70.3s on the calendar that may not have many points but can still make a difference when things are getting close, so it’s hard to tell at this point who will actually qualify. Some athletes (likely including Liz Blatchford or Asa Lundstroem) may also miss July qualifying but then look for another race in August to secure one of the seven female slots in August that are even harder to predict.