This is the first of a series of posts on the fastest and best times in 2017 Ironman-distance races. I will look at the best swim, bike, run and overall times for the men and women as well as the resulting ratings at the end of 2017. This post is about the fastest female swimmers.

The fastest 12 swim times in a 2017 Ironman are from Cozumel and Chattanooga where currents helped athletes to post really fast times. The fastest time from another Ironman is by Lucy Charles who swam a 47:06 at IM Lanzarote.

If you have watched IM Kona, there won’t be any doubt who are currently the fastest females swimmers: Lucy Charles and Lauren Brandon built a huge lead over the other females in the swim. Between them, they also have the five best 2017 swim performances. 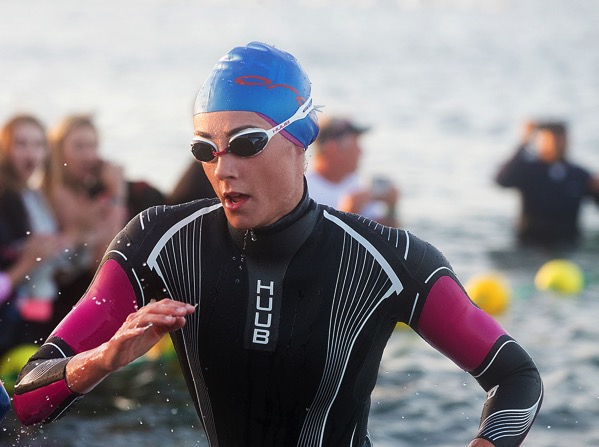 Lucy’s swims in Lanzarote and Kona are the #1 and #2 best performances, they are almost at the same level. (Lucy’s third 2017 Ironman race was IM Frankfurt which is classified as invalid because of a shortened bike course. Her swim performance at Frankfurt would have placed sixth on the list.) Lauren Brandon’s swims in Hawaii, Mont Tremblant and Texas were only slightly slower performances.

With the number of dominating swims in their 2017 Ironman races, Lucy and Lauren also lead the Swim Ratings at the end of 2017. (Both just had one IM at the end of 2016 and haven’t been ranked a year ago.) There is a sizable gap of more than two minutes to #3 Haley Chura who returned to IM-distance racing in 2017 after a long injury break.

Last year’s best-rated swimmer was Jodie Cunnama, she has become a new mom to son Jack, hasn’t been able to race an Ironman in 2017 and consequently has dropped out of the rankings. She is probably going to re-enter the list of top swimmers when she returns to racing in 2018.