This post looks at the fastest times and best performances by the men in the run leg.

Patrick Lange’s run in Kona was the only sub-2:40 run this year (last year there were four). Other than Texas (three runs) each course has just one of run in the Top 10.

There can’t be a doubt that Patrick’s run in Kona is also the best 2017 run performance – the fastest run time on one of the harder run courses is in fact more than five minutes quicker than any other run performance. Of note is also the #5 performance: Even though Kevin Collington “only” ran a 3:07, doing so in the tough conditions of Taiwan means it’s equivalent to a 2:44 run on a “neutral” run course!

Patrick also storms to the front of the run rankings, he’s leading by five minutes over last year’s #1 Jan Frodeno. Patrick’s runs in Kona have raised the marathon in an IM to a new level, there’s no doubt that he’s currently the fastest runner in long-distance triathlon. 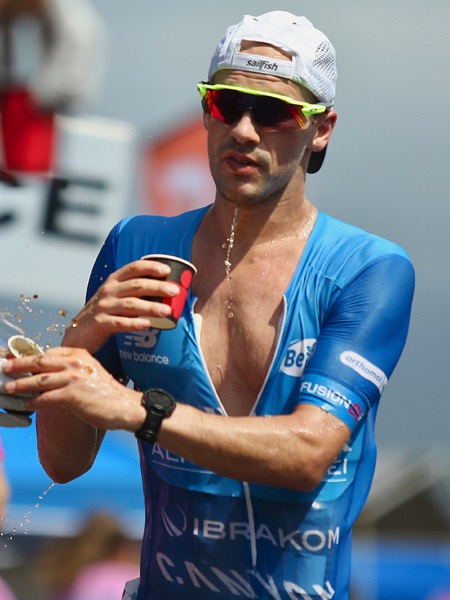 Foto: Patrick grabbing drinks on the run in Kona.

Almost everyone in the Top 10 has improved their run rating – a clear indication that we can expect some more fast runs in the 2018 season.