At the end of last year I extended my ratings to the individual disciplines, so you get a better picture of where each athlete’s strengths and weaknesses are. This also allows me to get a more detailed look at how the race might unfold. I think that the graphs give you good picture of what a “typical” race between these athletes is going to look like – and I hope that you will also be able to quickly spot if an athlete is doing much better (or worse) than what could be expected. Of course, there is still a lot of room left for speculation: Is athlete A going too fast on the bike (so he will blow up on the run – think Marino in Kona)? Athlete B is a great runner, but can she can afford to give up that much time on the bike (for example, Rinnie)?

A (little) qualifier: Of course, this is just based on “pure” numbers. This does not take “race dynamics” into account. I’m pretty sure that there will be little groups during the swim and bike and that the athletes in these groups will finish closer together than the pure numbers indicate. Also, there is no (statistically valid) way that I can predict the performance of the new IM athletes – therefore they are not included in the graphs. Especially the performance of Bevan Docherty is offering a lot of room for speculation.

With the above qualifiers, here’s how I think the men’s race is probably going to unfold: 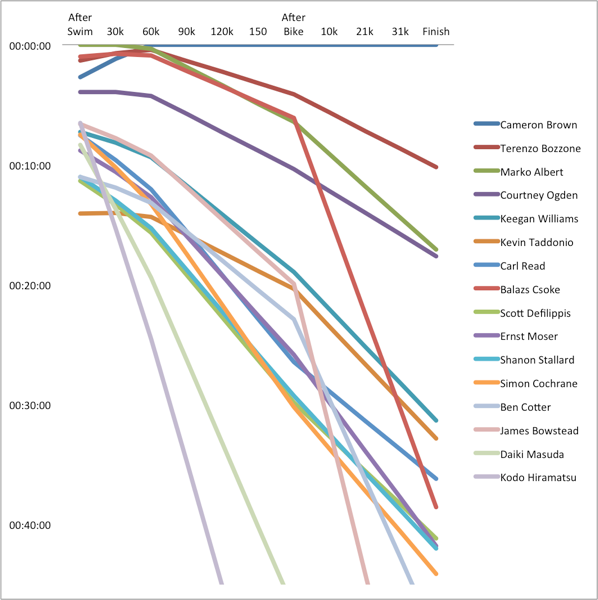 The graph shows how much behind the race leader each athlete is going to be. (A lot of inspiration come from Russel Cox’s post-race posts showing how a race did unfold using the IMLive data, e.g. for Arizona 2012 or Cozumel 2012.)

Here are a few highlights:

Here’s the corresponding graph for the women’s race in New Zealand: 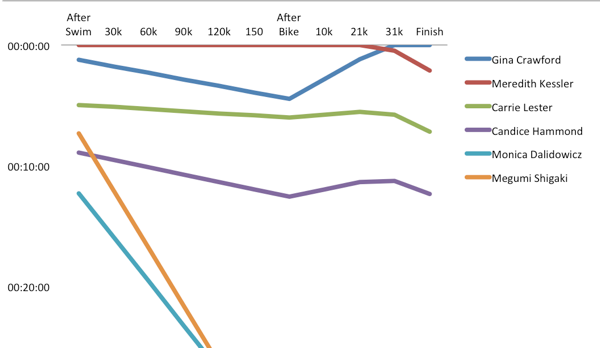 The women’s field is much smaller, but it will probably be a bit more exciting towards the end: