As expected, the course in Nice made for a fascinating races as both the male and female fields were blown apart on the tough climbs on the bike leg. It resulted in finishing times that were relatively slow compared to other 70.3 Champs but pretty much as expected after last year’s 70.3 Nice on prettying much the same course. While the swim and run adjustments were on-par were with other 70.3 Champs,  the bike adjustment was roughly 15 minutes slower than last year’s 70.3 Worlds in Nelson Mandela Bay.

70.3 World Champs have been held in changing locations, so there are no “real” course records.

70.3 World Championships offers Automatic Qualifier slots for Kona for the winners. It has a total prize purse of 250.000 US$, paying 10 deep. The lists below indicate Kona 2019 qualifiers with “(KQ)”.

For now, the list reflects the athletes that have qualified and accepted their slots (minus very few withdrawals already processed). I expect about 50 athletes for each gender once the bib list is released and even fewer actually starting on race day. When information about athletes not racing becomes available, I will cross out the names on this list until the bib list is released by Ironman.

Athletes also qualified for this year’s Kona are marked with “KQ”.

At last year’s 70.3 Championships in Chattanooga, Emma Pallant was one of the young athletes on the podium: With the fastest run-split, she was able to claim second place behind a dominating Daniela Ryf. 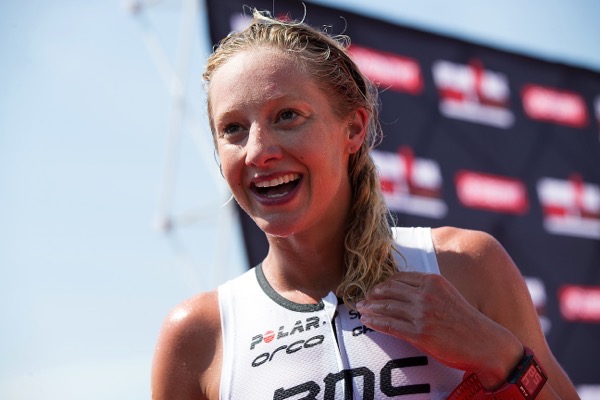 This year she changed her focus a bit, also racing on the full Ironman-distance with a goal to qualify for Kona. Her first race did not go as planned and she was forced to DNF Ironman South Africa. Her second Ironman start was more successful, finishing third at IM Austria after leading the race for some time but then struggling towards the end of the run – still securing a Kona slot. Even with her Ironman focus, she was still racing well on the 70.3 distance, winning the races in Barcelona, Staffordshire and Dun Laoghaire.

Thorsten: With your third place in Austria you are qualified for Kona and have accepted your slot. Will you be racing 70.3 Championships as well?

Emma: I will definitely be racing South Africa this year! It’s my goal for the season and for sure it would be great to top last year but I try not to go into races thinking about what I want out of them and instead focus on what I’m going to put into it. I’ve been training and preparing the hardest ever and hopefully the new gains we have been making can pay off in the race, the only thing I know for certain and that I can control is that I will be out there giving it my ALL!

T: What’s the goal for Kona this year?

E: This year Kona is purely about going out there for the experience. I have heaps to learn about Ironman let alone Kona but really want to take my time with the journey and do it the right way, taking every bit of experience that I can from each race but without it taking away from the key goals of the year. The A race is the 70.3 Worlds, and this fits in perfectly with Kona after. Kona is ultimately the big life goal so I think it’s never too early to gain experience.

T: You had to DNF in South Africa with an injury, is that completely behind you or is it still something to manage?

E: I changed my bike position for South Africa and trained on it in our camp in Spain. But we trained predominantly in the hills and so I never really spent too long in the bars. We knew my shape was good and wanted to be as aero as possible for what was quite a flat course because this is definitely one of my weaknesses at the moment. But I had back problems (at the time I didn’t know it was from the back) and the sharp pain in my calf halfway into the bike which was worsening every step on the run caused me to pull out. After that race I had some treatment for the great BMC-vifit staff on our camp in Mallorca and we readjusted my position and now all is feeling good. I still have to learn to spend more time in the bars to ride more strongly on flat courses but again this is something we are gradually building up over time to protect the back for a long-term career in Ironman.

T: How will the logistics of 70.3 Champs, Kona camp and travel to Kona work for you?

E: Unfortunately my best friend’s wedding (Olympic middle-distance runner Steph Twell) is getting married on September 28th and I’m her chief bridesmaid. So I have to fly back from South Africa to do a few weeks preparation in Lanzarote and then fly from there to the wedding and then out to Kona. My coach Michelle Dillon and her husband (my training partner) will be in Australia for AG World Champs so I will train on my own this time. But I think if you have the right attitude you make the best of it and just push everything possible. I will give this preparation all my best and I love the great team there at Sands Active who are hosting me!

What are Emma’s chances at Nelson Mandela Bay for another podium finish?

First of all, it’ll be interesting to see how the Ironman training is going to affect her speed on the shorter distance. This will also impact the other athletes that have stepped up and qualified for Kona for the first time such as Anne Haug, Helle Frederiksen or Sarah True. Other top athletes such as Lucy Charles, Melissa Hauschildt and of course Daniela Ryf have more experience racing these two distances. There are a few others in the field that are completely focused on the shorter distance: Heather Wurtele, Ellie Salthouse or Radka Kahlefeldt are therefore serious contenders for a podium finish.

Assuming that Emma will be in excellent form for the 70.3 World Championships, she will still have to swim and bike well enough so that her strong run is going to matter. Even if Daniela is not having a special day such as in Chattanooga last year,  she should swim and bike significantly faster than Emma and will be out of reach in T2. Emma should reach T2 at roughly the same time as Anne Haug, but Anne has been running a few minutes faster than Emma in the two races they’ve been racing each other. But on a good day Emma is able to put two or more minutes into everyone else in the field, so if she can start the run just a minute or two within the Top 3 spots, she could still be able to run herself onto the podium. So even if the female race has a clear favorite in Daniela, there will be close racing for the other podium spots – with Emma likely to play an important role!