The biggest hope in Kona for my Spanish friends at BCN Triathlon is Eneko Llanos. They’ve asked me to have a closer look at him – here is what I put together on him and his chances for Kona 2013. (If you’re a Spanish speaker, check out the Spanish version: Análisis de las posibilidades de Eneko en Kona on BCN Triathlon.)

Eneko Llanos is one of the few athletes whose career started before 2005 (which is how far back my results go), but as far as I know I’ve captured all his Ironman-distance results. Here’s a table of the IM-distance races I have in my database for Eneko:

(Eneko himself has contacted me to note that the Germany 2005 result I have listed in the table is actually from his brother Hector. I have updated my database accordingly, but the general picture for Eneko doesn’t change much.)

In addition to the splits there are three main data points for each race:

It’s easier to spot trends and anomalies in a graphical version of this data: 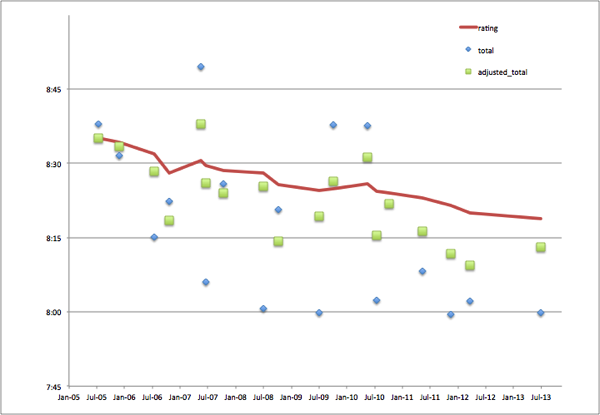 Before becoming focused on long-distance racing, Eneko was a good short-distance racer (competing twice in the Olympics); and he continues to race very well in XTerra races. He seems to like the Maui race (usually a few weeks after Kona), and he won the Kona/Maui “double” a couple of times.

His IM career started in 2005, when he finished Western Australia slightly above 8:30. He qualified for Hawaii in Austria (adjusted time again in 8:30 range), and Kona 2006 was his best race so far (adjusted 8:18) and he finished 5th.

In 2007 he won his “home IM” in Lanzarote (with a relatively slow time, even adjusted) and then posted a fast time Roth (even if the 8:06 is adjusted to his “then typical” 8:26). Again, he had a solid Kona race and finished 7th. He continued to deliver great results in 2008, when he got a 2nd place in Frankfurt and also in Kona. He was leading the Kona race for a bit on the run, but Craig Alexander took the lead in the Energy Lab, and won by merely two minutes over Eneko.

He used a similar approach in 2009 – and it started well as he got another 2nd in Germany (contending for the win by breaking Macca, but being ultimately run down by Timo Bracht). However, his Kona race was a disappointment and he finished in 14th place. He seemed to take a less Kona-centric approach in 2010. He raced and won again in Lanzarote, and went to Roth to post a fast time, finishing in 3rd place in 8:02. He then raced in Kona, finishing in a solid 7th with a good 2:47 run. By then he had established himself as a solid Top10 Kona athlete, but other than Lanzarote he hadn’t won any IM races and it was clear that he would have to improve further to contend for wins in the big races.

He absolutely stepped up his game in 2011. He raced IM Texas (which was the North American regional championship that year), and won in convincing fashion. He then focused on Kona, but had a DNF with gastric problems. He recovered enough to race the XTerra championship in Maui, and then decided to race Arizona in November to get the required points for Kona qualification. He finished with three PRs (bike, run and overall), posting his first sub-8h time. What might have been as important than winning the race is that he had to fight it out with Paul Amey in the last few kilometers of the run and came away as the winner which probably gave him some extra confidence. 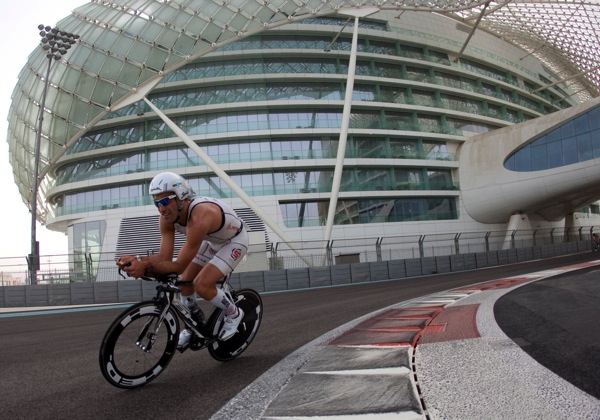 In Melbourne 2012, he had another great race, even if he didn’t win it: He placed 4th in what was probably the tightest IM distance race: There was a group of four athletes running together for the first half of the marathon. Even if the run course might have been a bit short, his adjusted 8:09 was the best IM result so far. He had enough points to have secured a Kona slot, where he had another frustrating DNF with two flats and crashing on his bike.

He continued to improve even further in 2013. This time, he won in Melbourne (Australasian Regional Championship) against a stacked field in a race with a shortened swim. (The times are so different from a full IM that I don’t include them in my ratings.) In the summer, he also won the European Championships in Frankfurt, another very strong field and posting his second sub-8h time.

It’s hard to predict what result Eneko is going to have in Kona. It is obvious that he’s been in excellent shape all season and that he has everything that would be needed to win Kona. However, aside from one 2nd place, he hasn’t had really great results in Kona. I think he was trying to address this aspect when he started to work with Dave Scott this year, one of the absolute best authorities on how to race well in Kona.

The main point against Eneko winning Kona this year seems a bit strange at first: He has won two big races this year. It is hard to deliver two good Ironman races in a season, and three is extremely difficult. Usually the motto “to be in shape for Kona, you can’t be in good shape for the summer” applies – I can’t think of any athlete who has won Frankfurt and Kona in the same year.

But I’m sure he’ll try his best to be in the mix – my prediction for him is that he’ll be either in the Top5 or blow up trying.