Before Kona, there was a lot of speculation about Caroline Steffen’s prep which included a full Ironman-distance race just six weeks before Kona. Now that the race is over, I have a closer look at some of the data on the impact of season planning for performance in Kona.

Of course this analysis has some limitations:

With these caveats out of the way, let’s have a look at the data. I’ll be showing graphs of athletes Kona performance. The Kona performance is the time difference (in minutes) between their Rating (based on all their previous results) and their normalized Kona finish time, after accounting for the course and conditions on race day. A „normal“ day would produce a Kona performance of 0, performances larger than 0 mean that the athlete performed better than expected, negative numbers indicate that things didn’t go quite as well.

The first graph show the athletes Kona performance in relation to the time that each athlete took between racing his/her last Ironman-distance race before Kona: 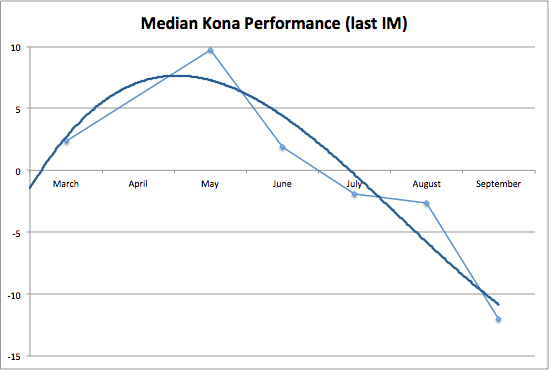 The month names indicate when the last IM-distance race was, the light blue line shows the median Kona performances, and the thicker blue line a „best fit“ for the data.

Here’s the raw data behind this graph:

There are a few interesting observations in this data:

I’ve posted a similar analysis in 2011, with very similar observations.

Number of IMs before Kona

There is another way to look at the Kona performance: in relation to the number of IMs athletes have raced before Kona: 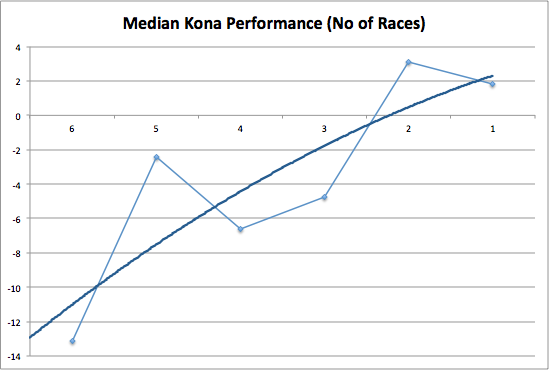 Again, the light line with the data points show the actual data, and the darker line a best fit. (6 is actually a category representing 6 or more races. It won’t be a surprise that the athlete with the most was Peter Vabrousek with 11 IM-distance races between Kona 2012 and 2013.)

I think that there are a few implications for athletes that want to focus on their Kona performance:

Unfortunately, this is a bit in conflict with the way WTC has set up the KPR system – late season big races, and the hectic August qualifying. In my opinion, this is not the best way to set up athletes for great Kona performances.