Late last year, I’ve looked at data concerning the depth of the women’s field and comparing that to the depth of the men’s field. (If you haven’t read it yet, please check out my post “Women’s Field as Deep as Men’s?“.) I have to admit that I was a bit surprised that I wasn’t finding any noticeable difference in recent year’s. My first interest into triathlon was in the late 80’s when Paula Newby-Fraser was such a dominating force in the sport that she seemed to win almost at will and if there was only an Erin Baker on a good day who was able to challenge her.

This led me to have a look at some older data – maybe the depth of the women’s field has improved over time? I wasn’t able to produce the same type of graphs that I used in my previous post as I just don’t have the data. However, I was able to find a list of the top 10 finishers on Slowtwitch (Top Ironman Hawaii Finishers Archive) that I used as my basis for a similar analysis. As a measure for the depth of the field I am using the Top 10 degradation, defined as the cumulative time the Top 10 finishers were behind the winner in each year (for example, in 2014 the Top10 men were 1h24min behind the winner, while the women were 2h01min behind). In order to reflect the different winning times for men and women, I’m calculating the percentage of this sum of the winner’s time (still using 2014 data, 17% for the men, 22.4% for the women). Please note that this measure doesn’t reflect the different field sizes (that lead to increased time differences) – meaning that a similar depth of field would have a larger Top 10 degradation for the women.

Here’s the graph showing the development of the Top10 degradation in Kona over the years for the men (blue line) and women (red line): 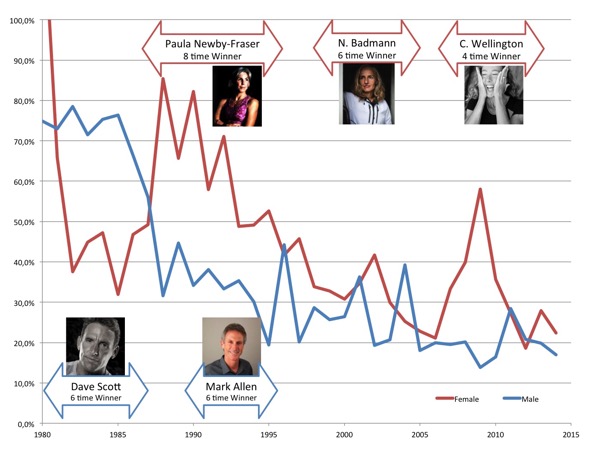 In order to give context to the time periods, I’ve added some of the biggest Kona winners. Here’s my interpretation of this data:

My conclusion of this data: In the early years of our sport, it took some time to develop a decent depth of the field. The men’s field improved first (until the late 80s – at the end of the Dave Scott era), and the women’s field took about ten years longer (until the late 90s – the Natascha Badmann era). Certainly, things have changed a lot since the days of Paula Newby-Fraser – it now takes an absolutely dominating figure such as Chrissie Wellington to „disrupt“ the numbers. Chrissie pushed the women’s field another big step forward, and these days the Top10 degradation indicates no different depth between the men’s and women’s field.